So...to say that I've been a little stressed getting ready for our trip is a complete understatement. My mind has been on overload for a few weeks and my poor kids haven't seen the best of me lately. 5 days before our trip I hit a breaking point. Every afternoon the kids and I have a bowl of cereal for a snack after their naps. We all ate it, then Brayden wanted more. Then Brooklyn wanted more. I knew she wouldn't eat much more, so I just gave her a little bit. Well she freaked out because she wanted "lots." I tried to calmly say no, but the louder she screamed the closer I got to losing it. I'm trying not to yell and the kids so much, so instead of yelling I got the box of cereal and poured cereal until it was spilling over the edges, then walked away to cool off. I came back and calmly poured the cereal back into the box and gave her some milk. Next thing I knew she was screaming at me again, this time for some sugar. I gave her some, but she couldn't "see" it so she started freaking out again. I lost it. But instead of yelling, I grabbed the sugar cup and poured about 1 1/2 cups of sugar on her cereal, threw the cup on the stove, and walked away I was SO mad. Brooklyn wasn't quite sure what was going on, so she just left the table and went to start playing. I scooped as much sugar as I could off, but it was a complete loss. When I was telling my sister the story later that night and showed her the bowl, she told me I had to take a picture and document this moment. So here it is. And although I did go overboard a little bit, I can proudly say that I handled the entire situation without yelling. I'm not saying that this was better, but atleast it's a start! Don't forget...this picture was taken after I scooped out as much cereal and sugar as I could save. 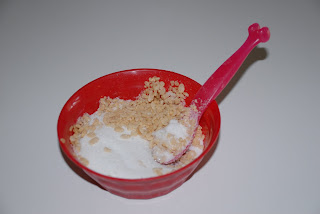 HA HA HA that made me laugh so hard! awesome! :)

Just what i have to look forward to :) Well great job, Jon and I really do not want to have a yelling house either! hope you enjoyed your vacation to Cali!

I have to say I think this was hilarious! I have SO been there, and I am so glad I'm not the only mom to throw a tantrum.

Oh my gosh .... I was laughing sooo hard at this post and picturing your every step as I continued to read this post. I would have loved to have seen your kids' faces when all this was going on. I'm proud of your not yelling ... I'm trying to work on that as well right now. How was Disneyland - can't wait to see pics!!!

I am seriously laughing out loud!! ha ha!!! You are too funny! Way to go not yelling!

Shantelle, I have to say that this is by far one of my favorite posts EVER on ANYONE's blog!!! Very rarely do people write about how life really is, and it cracks me up because we all know that EVERY mother has these moments. So thank you for sharing this!