Brooklyn loves to climb in the dishwasher. She is a great helper at unloading the dishes, whether they be clean or dirty. She knows she shouldn't climb on it, so the first picture is when she realized she was caught. 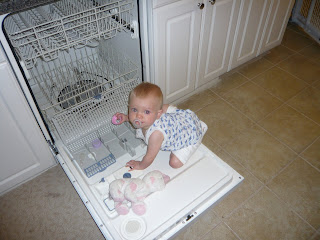 She was so cute I had to let her keep playing. 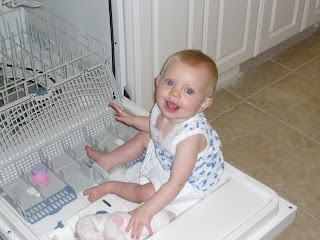 When Josh cleans the fish tank, he puts our huge goldfish in the tub. The kids LOVE watching them swim around and they always end up over feeding them. Since this was the first time at this house, Brayden was so cute showing Brooklyn the fish and telling her all about them. 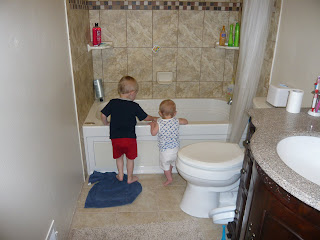 Posted by Shantelle at 2:12 PM 1 comments

Our season passes to the zoo ended at the end of June, so we thought we better go one more time. Josh's sister Rachael came with us and we had a blast. Here is Rachael and Brayden looking at the monkeys: 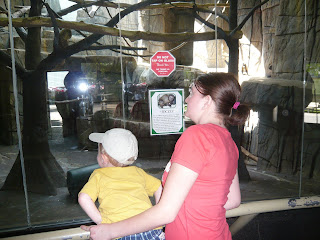 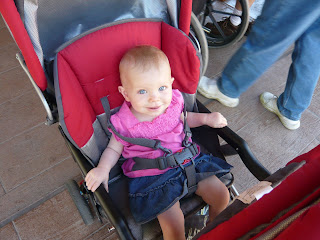 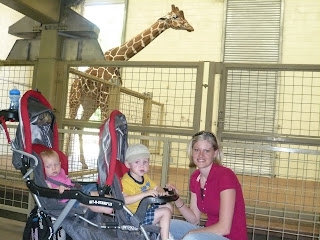 The highlight of the day was the train ride. We haven't been on the train for a while since I'm usually by myself with the kids, so it was nice to have Rachael to help. The kids loved the train, of course. 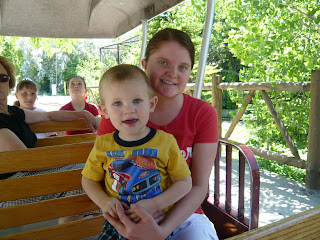 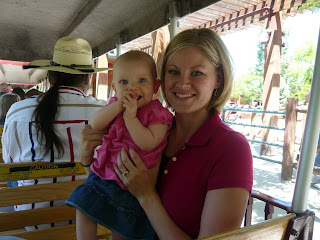 Last week I got together with two friends that I used to dance with. We spent the morning talking and playing with our kids. It was fun to see them and hopefully we can do this more often! Right before we left we walked to a little park and let the kids play for a bit. Here are the pics of what my kids did the entire time we were at the park: 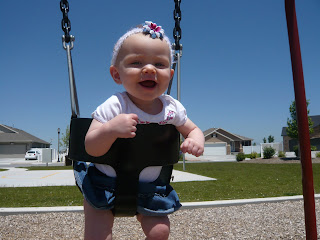 Thank goodness I was smart to bring Brayden's b-ball. All he did, of course, was shoot hoops. 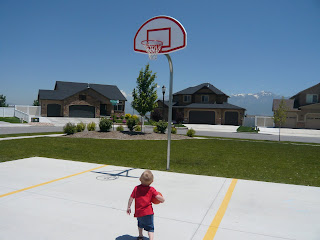 Posted by Shantelle at 1:47 PM 2 comments

We had a fun and relaxed Father's Day. I made sure Josh was able to sleep in, then we had breakfast and got ready for church. Josh's dad spoke in their ward, so we went to hear him speak. He did a wonderful job. We left and headed over to my dad's to visit with my parents. Here are my parents with the kids: 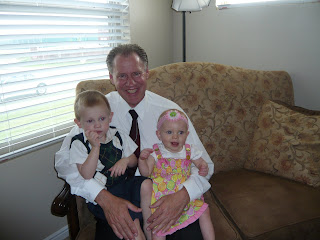 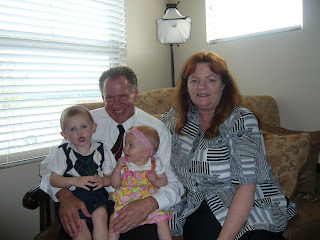 We then headed back to the Ericson's for a big BBQ dinner with Steve's side of the family. It was fun to spend time with all the Ericson's, especially Grandpa Ericson. Surprisingly, Brayden did pretty well with all the pictures I wanted to take. He usually refuses. Here's Josh with the kids: 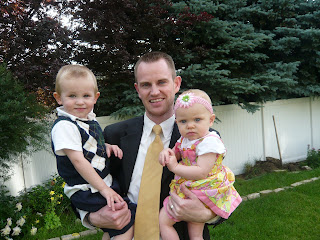 Josh and his dad with the kids: 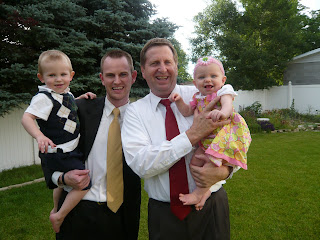 One picture I have always wanted to take but never have is a 4 generation picture. I was so grateful that Brayden cooperated and we got some really nice pictures. 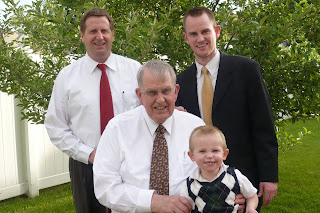 I'm so grateful to be surrounded by such wonderful priesthood holders. Our grandfathers did a great job raising our dads and I'm grateful for the influence they continue to have in our lives. We are blessed to each have a dad that cares so much for us and our kids. And I am eternally grateful for the father Josh has become. Thanks dads for all you do!!!

Posted by Shantelle at 1:30 PM 1 comments

For weeks I have been debating what I should do with my hair. I like it long, but I only do it about once every 1-2 weeks. So I knew it was time to change. Josh and I were watching TV while I was straightening my hair one night. I had a lot of my hair pulled back so it looked like I had short hair. I turned to Josh and asked him if I should cut my hair. His response was, "Well I would." I then told him that I thought he liked long hair. His reply was, "Not like that." That was all I needed to push me over the edge. Here is my before picture: 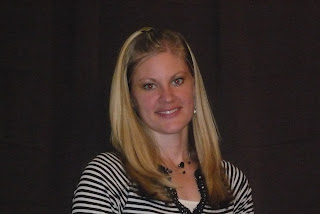 I wasn't sure how I wanted it since it has been 10 years since I had short hair. So we stayed a little safe and it turned out like this: 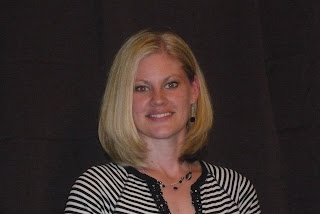 I really liked it, but my hair grows about 3/4" a month, so within weeks it would be longer than I wanted it. So I went back 2 days later and ended up with this cut: 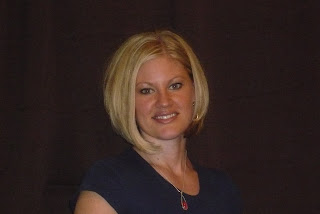 I absolutely LOVE it. When she was cutting it I didn't know what I was getting myself into, thinking it was way too short. But after it was styled I realized it was exactly what I was hoping for. I've never had hair this short, so I've gotta learn how to do it. It'll be great for the summer and now I think I'll actually do it everyday since it won't take 20 minutes to blowdry. Yeah!

Posted by Shantelle at 2:05 PM 5 comments

What a stormy week it has been! Every morning it looks beautiful, but every afternoon a huge lightning and hail storm come through. The first big storm hit in the evening. Brayden and I were watching from the window while Brooklyn was asleep. I grabbed a big blanket and Brayden and I sat on the porch all bundled up. For about 25 minutes we watched as Brayden saw his first bolts of lightning and loved hearing all the thunder. We would pull the blanket over our heads during the thunder and just laugh. It was so fun to experience this with him and see it through his eyes. This will definitely be one of my favorite memories with Brayden. Brooklyn woke up and joined us for about 10 minutes. Here we are all bundled up: 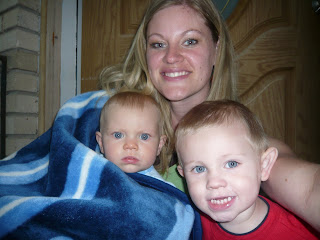 Posted by Shantelle at 2:26 PM 0 comments

My dad came over to finish putting in some light fixtures and plugs for us. All day while waiting for grandpa Brayden carried his tools around the house. He loves his grandpa and loves working with him. Brayden got to use his pliers and also screw on the outlet plates. Here are the two guys hard at work: 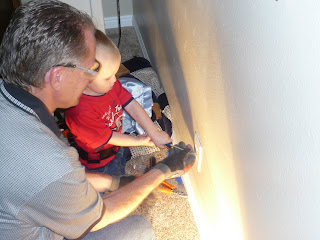 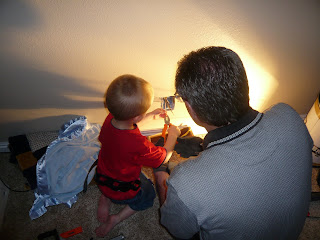 Posted by Shantelle at 2:22 PM 0 comments

On Saturday we went to Josh's work for their annual summer party. We had a lot of fun. We ate a lot of food and enjoyed the afternoon. The weather was perfect as it was slightly overcast. I'm bummed I forgot to take a family picture, but here are the few I did take. 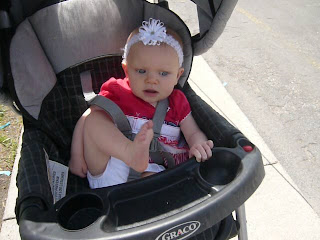 Brayden loved following the sherriff dog around, but he wouldn't get closer than this. 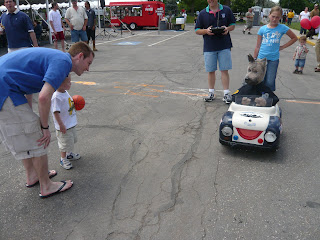 Each of the kids got a balloon which I tied to the stroller. Apparently I didn't do a great tying job and Brayden's balloon got loose in the wind. Josh thought it would be a great idea to point it out to Brayden by saying, "Look Bud! There goes your balloon!" That was the WRONG thing to do. Instead of watching it go into the clouds, he broke down and started screaming for his balloon to come back. There was no consolling him. We went back to get him another one, but of course they were out of blue. So he got a green one instead. It took about 30 minutes for him to calm down. (It didn't help that this was all during nap time so he was already tired and on edge.) I couldn't help myself from taking pictures of his cute little face all upset. 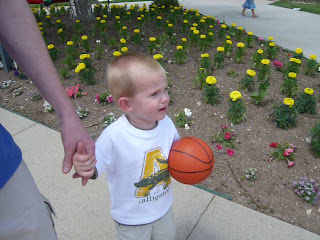 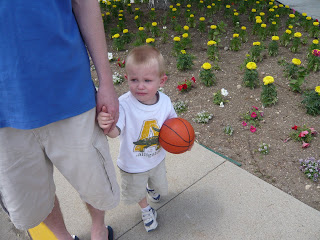 Posted by Shantelle at 7:55 PM 0 comments

To advertise for the air show last week, they had random flyovers throughout the week. When Brayden and I heard the planes, we ran outside like always to see the airplane. To our surprise we saw a jet and 4 thunderbirds. I grabbed my camera and ended up taking 61 pictures as they circled the east side of the valley for about an hour. It seemed everytime they came by they were closer. Brayden loved watching them the entire time. I'm not sure why I was so excited, but I really enjoyed it as well. 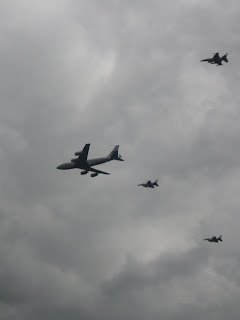 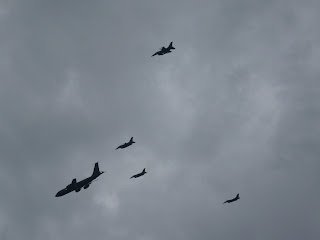 Posted by Shantelle at 7:48 PM 0 comments