I've been waiting SO SO SO long for Brooklyn's hair to grow. The other day I decided to try and do something will all of her hair, not just the hair on top. So I tried some pigtails and they worked! They didn't last too long before little hairs started escaping, but I was extremely excited that it is now possible! 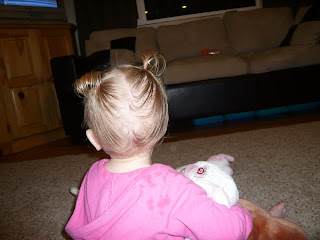 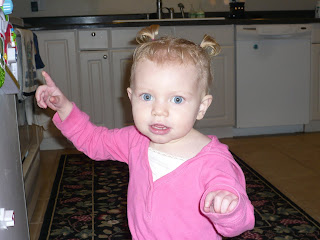 Last night I decided to try a ponytail, and it turned out adorable! Again it didn't last the entire evening, but even when little hairs started coming loose it still was cute. 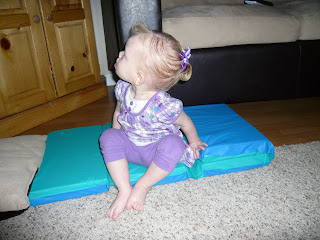 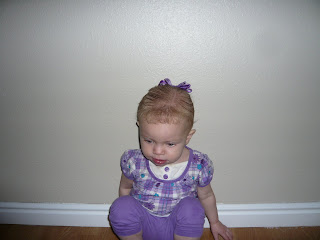 Josh keeps telling me we better not have any more girls, or we would NEVER get out the door. I'm always spending way too much time getting this little princess ready. Posted by Shantelle at 2:05 PM 5 comments

Last Monday a new show started on the Disney Channel, I had recorded it in the morning and before Brayden went to bed I told him he could watch it. He stood like this the ENTIRE 25 minute show. I couldn't believe he was so mesmorized that he didn't walk 1 foot and hop on the couch. Looks like we have a new favorite show! 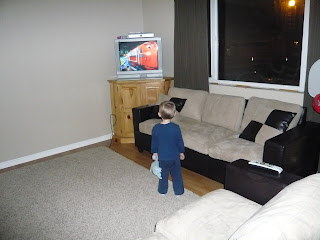 Posted by Shantelle at 2:02 PM 0 comments

There are some things as a mom you know for sure...like babies spit up, potty training is not fun, and if you give a 1 year old yogurt they WILL make a mess. So yes, I knew this prior to giving her this yogurt, but she has become SO independant I wasn't about to try and stop this from happening: 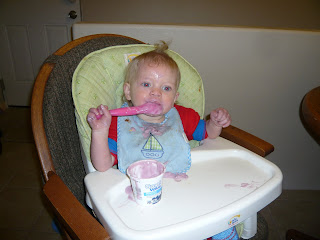 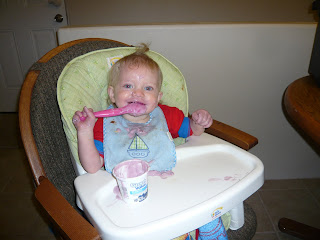 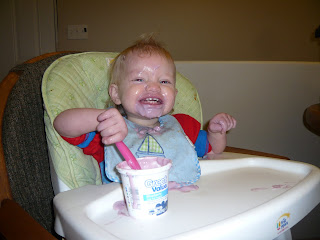 Posted by Shantelle at 1:58 PM 0 comments

Saturday night, the 9th, was Kay's birthday. We spent the evening with them at the Ericson's. When we first got there I gave each of the kids a rose and had them walk in and give it to her. It was SO adorable and sweet I almost started crying! Of course I had left my camera in my car so I didn't capture that moment, but we took pictures of the kids and their roses after. 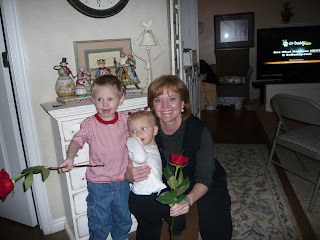 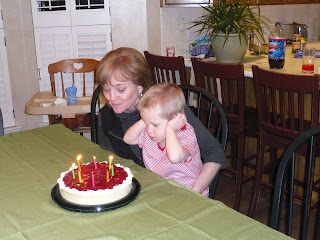 Of course we had to take pics of the kids in their pj's. I really need a new camera, as all the pictures I took turned out fuzzy. Btw, notice two of Josh's brothers on the couch hiding so they aren't in the pictures. It was too much effort to get off the couch, so hiding behind pillows was the alternative. 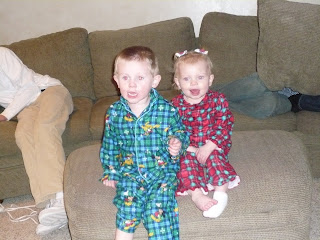 Posted by Shantelle at 1:45 PM 0 comments

The kids do this to me ALL the time, but Josh definitely wasn't ready for this. The kids love to sit on my stomach, then start jumping up and down. I couldn't stop laughing as it knocked the wind out of Josh since he wasn't expecting it. Of course I had to get my camera and have the kids do it again, which the kids enjoyed but Josh did not... 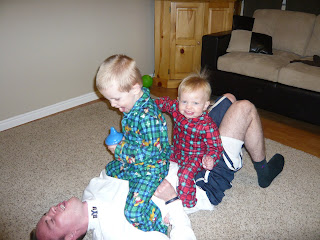 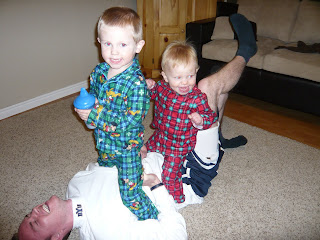 Posted by Shantelle at 1:38 PM 0 comments

A friend in our ward invited us to their house for New Year's Eve, but since we already had plans we weren't able to go. Somehow their invite turned into deciding to go up to the cabin for the weekend. It was very random and sporadic, but turned out to be A LOT of fun. Since we were up way late for New Year's Eve, we all slept in until about 10:30 when the kids woke up. We rushed to get everything packed, ran to the store, and loaded up our car and Nick & Kesha's truck. They have the cutest little 2 1/2 year old boy, Boston, that Brayden plays with in nursery. We ended up leaving a lot later than expected around 3. Of course the kids hadn't napped yet, so you would think they would sleep in the car...nope! I officially have the HARDEST traveling kids in the world. They were both exhausted, yet wouldn't just relax and sleep. So we got to listen to Brooklyn scream the entire way up there (of course she finally did fall asleep in the last 10 minutes before we got there.)

We made it to the freezing cold cabin quickly on the snowmobiles and started a fire. It took a while to heat up the cabin, but with some space heaters we were able to get the kids to bed pretty early. Then we were able to eat and play some games. We didn't know Nic and Kesha very well, so it was fun to spend a lot of time talking with them. Kesha is due with her 2nd boy in 3 weeks, so we were amazed she ended up staying up with us all night playing games ('til about 2 the first night and 3 the second night.) We were EXTREMELY grateful she didn't go into labor, since last New Year's one of Mike's friends had her water break within 2 hours of getting to the cabin.

On Saturday we all headed outside for some fun sledding. Here are a bunch of pics of the guys with the kids. Josh and Brayden: 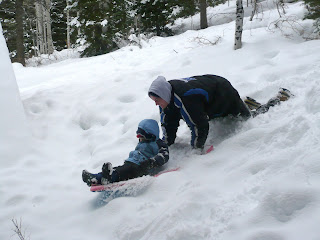 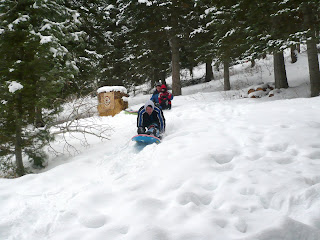 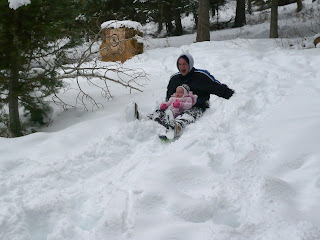 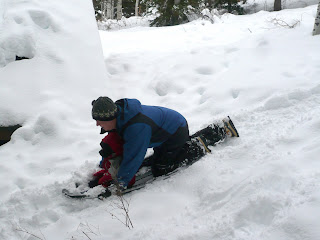 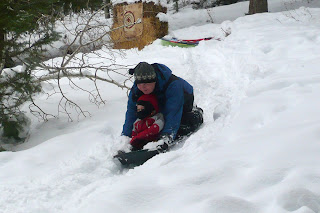 The kids before our snowmobile ride: 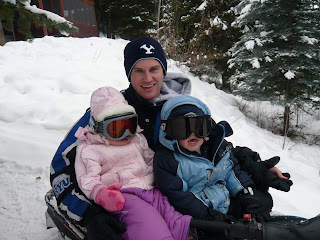 After lunch I put Brooklyn down for a nap. I was scheduled to play the piano at my sister-in-law's sister's wedding reception in Brigham City. Luckily it wasn't snowing, so I was able to make it there in about 1 1/2 hours, played for an hour, then drove the 1 1/2 hours back to the cabin. I can't say it was the funnest little trip, but I was glad I made it safely and I enjoyed playing at the reception.
Like I said before we were up ALL night playing games. We had stopped on the way to the cabin and bought Super Mario Bros for the Wii, so we ended up playing that WAY too long. On Sunday we just relaxed, played more games, and enjoyed the beautiful day. We really enjoyed this cabin trip, more than I thought we would. Nic and Kesha are very relaxed and laid back, so we felt like we could relax more than we usually do and not stress to entertain them. We are excited that we got to know them better, and hope to continue spending time with them. 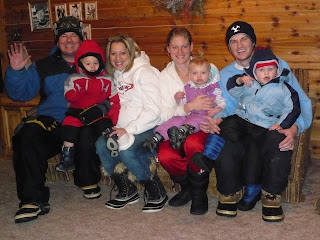 Posted by Shantelle at 1:16 PM 3 comments

For New Year's Eve we went over to the Tucker's new house for dinner and some games. We put all the kids down to sleep, except Brayden who was bouncing off the walls. We had an enjoyable evening. Here is my one picture of the night when Brayden was saying "Happy New Year" to everybody: 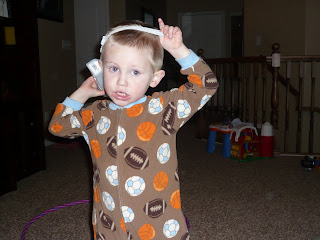 Posted by Shantelle at 1:12 PM 1 comments